skip to main | skip to sidebar

Women in Egypt by Angela Davis 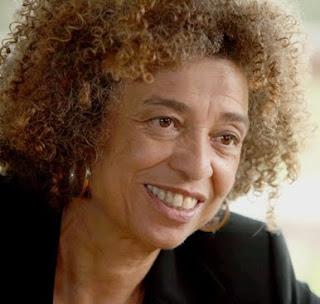 Women in Egypt is a theoretically rich essay that documents a trip Angela Davis took to Egypt in the mid-80's. She made the journey intending to write about her experience, not realizing at first that the funding for her travel stipulated that she focus her writing about women on sex. At the time there was a crusade on the part of some influential western feminists to "save" third world women from the practice of Female Genital Mutilation (FGM). This campaign was culturally insensitive, condescending and ignorant to the point of overt racism and often went hand in hand with an imperialist agenda. Davis was aware of this dynamic and sensitive to this complexity, but got caught in the middle of some serious conflict nonetheless, which she navigates thoughtfully here in telling the story.

Women in Egypt does a great job of reflecting all the nuances of this situation, taking colonial "feminists" to task for imposing an agenda onto a setting they often understood little about. Davis carefully re-frames the issues, documenting feminist debate/disagreement among Egyptian women and examining her own position as an African-American citizen of the United States with a revolutionary agenda. Davis does not defend FGM, but she explores how Egyptian feminists talk about it and gives the reader a complicated picture.

This condescending style of "feminism" probably sounds somewhat familiar to you, even if you haven't read much post-colonial feminist theory because it's very similar to what happened after 9/11. Suddenly Laura Bush and Ms. Magazine were working together to "save" Afghan women from the Taliban as a justification for war!* Imperial aggression on behalf of feminism? Who is "saved" by bombs? Please read what what RAWA and other Afghan women have to say about this if you haven't already.

I first read Women in Egypt during the Gulf War in early '91. I remember quoting it in an essay I wrote that examined media representations of women and war--contrasting the "liberated" American female soldier marching off to war to "save" the "oppressed" Arab woman symbolized by the veil. This has become such a prevalent trope since 9/11 that its hypocrisy might not strike us with the full force that it deserves.

In the face of this absurd propaganda and imperialist nonsense western feminists need to become familiar with the history of feminism in the Middle East. Egypt has a rich feminist history and is a good place to start. Last night when I was reading We Egyptian Women by Inji Aflatun I was struck by how much I don't know, although I have read some stuff...I don't want to generalize about Aflatun's essay, because I really don't fully understand the context it was written in, so I'm going to spend a little bit of time with that this week and it may be awhile before I write about it here.

Anyhow, I don't want to be like, HEY!, this is Jigsaw's GUIDE to FEMINIST THEORY like I know it all and I'm the authority on everything. It's more like, I really think it's important to talk about this stuff and by using Jigsaw as a way to do this work publicly, hopefully I'm encouraging participation and starting a conversation. I did study transnational feminisms in school but really think this needs to happen outside of the classroom setting in order to have more of an impact.

Re-Reading Women in Egypt by Angela Davis last night, I realized this was the starting point for me. It was when it clicked in my head, right, ok...if I want to know about women in Egypt, then I need to research Egyptian feminism and learn how women define issues there, because their issues are not going to be the same as my issues, duh, and also, I need to be careful not to treat "women in Egypt" as a monolithic entity, but realize that among Egyptian feminists there is disagreement and conflict and class difference...rural/urban difference etc....and I also need to look at the history of the country in terms of colonialism and examine the culture and look at the history of U.S. foreign policy, political economy...and position myself as a U.S. citizen, white, college-educated etc. In a word, specificity.

So I want to take this opportunity to thank Angela Davis for this great essay and suggest that everyone read it if you haven't already. It was published in her book Women, Culture and Politics but it may have been re-published since then. Her writing is so good here. A lot of her later work is filled with academic jargon and some of her earlier stuff is as well, but this is clear, super readable and seems to be written for a popular, non-academic audience. Highly recommended!

To my readers: I'd be interested in hearing about feminist theory that had a similarly expansive impact on your thinking.

*For more writing on this, check out an essay by Amy Farrel and Patrice McDermott called Claiming Afghan Women: The Challenge of Human Rights Discourse for Transnational Feminism in Just Advocacy: Women's Human Rights, Transnational Feminisms and The Politics of Representation, edited by Wendy S. Hesford and Wendy Kozol...it's hard to read (academic language) but pretty good.
Posted by Tobi Vail at 12:01 AM